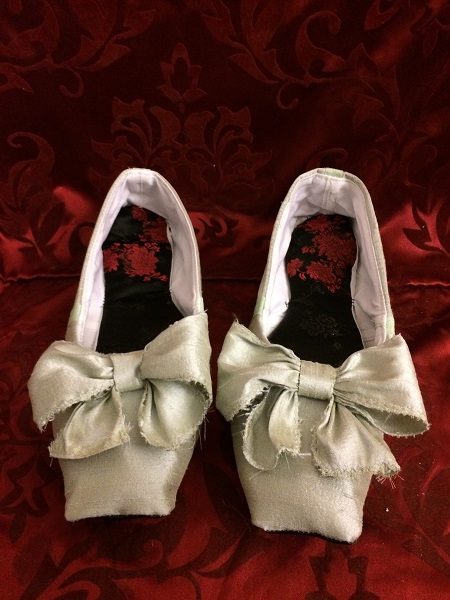 I have attended Regency balls and never have quite the right shoes to go with my Regency evening gowns. I had tried covering existing shoes with fabric once and bought flats with bling on them, but they did not look right. My goal was to make Regency dance slippers to match evening ball gowns for BAERS and other costumed English country dancing events.

I had attended a Regency shoe workshop at Costume College several years ago which was a disaster. I was the only one who finished shoes and they looked horrible. One of the problems was that the tracing of the foot was used as the sole, so my wide feet made a strange super wide shoe.

I decided to try again using existing patterns as a base. I started with McCall's M7068 because the pattern front had a square toed shoe. Those ended up too big like house slippers.

Then I tried the Regency shoe tutorial here http://oregonregency.blogspot.com/2010/08/miss-charlottes-shoe-tutorial.html that modifies Butterick B5523. Several mockups later, I finally found something that looks closer to a Regency dance slipper after a whole day of trial and error. 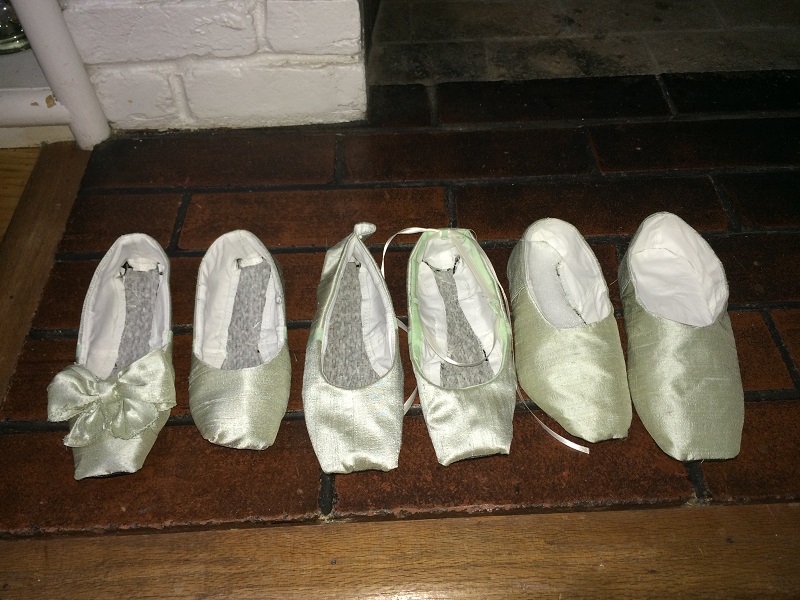 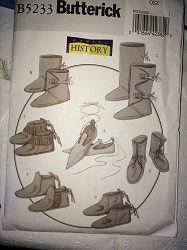 Butterick B5523
Made a smaller size smaller than what the pattern suggested. Squared off the toe. Used 1/4" seam for all seams. Cut the top into two pieces with the side back having straight seams and the front having a slightly slanted seam to tighten up the opening and lift up the toe box. Extant Regency slippers often have a slanted seam. 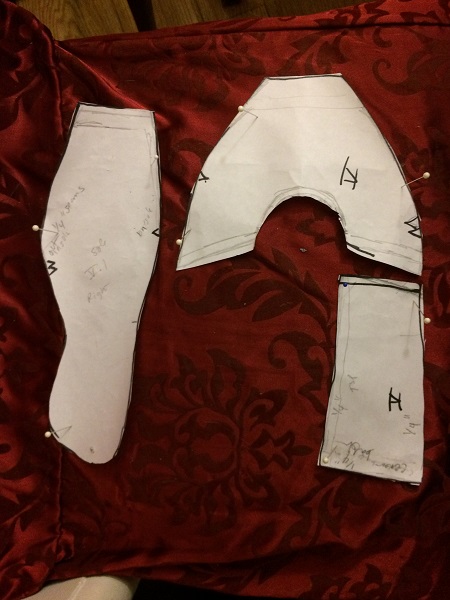 Regency dance slippers are ice green dupioni silk over faux leather with a cotton lining and satin poly and cotton covering an insole. Seam binding coveres the outside seams. Same fabric bows are tacked to the front.
Size: 6 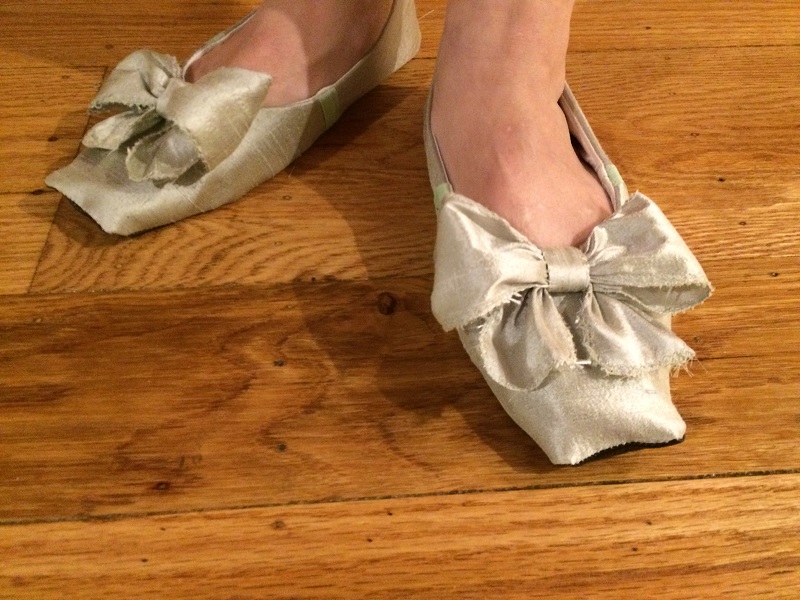 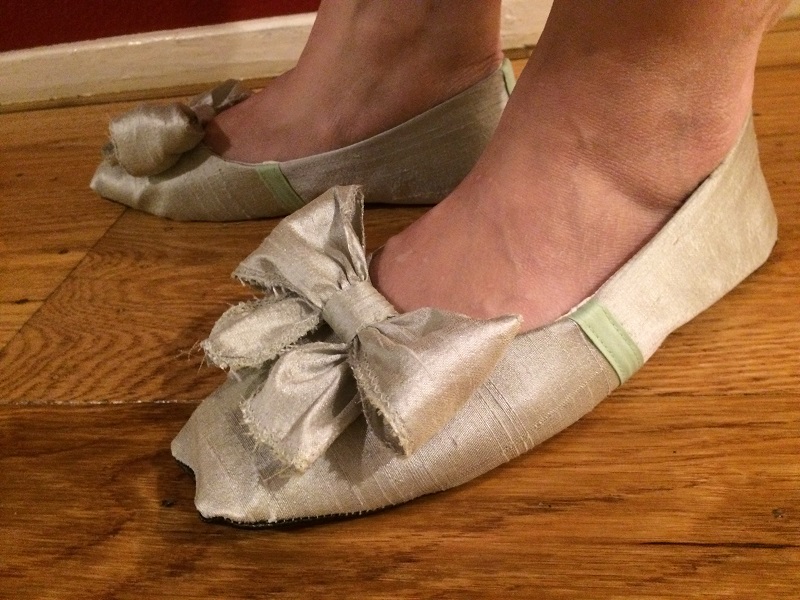 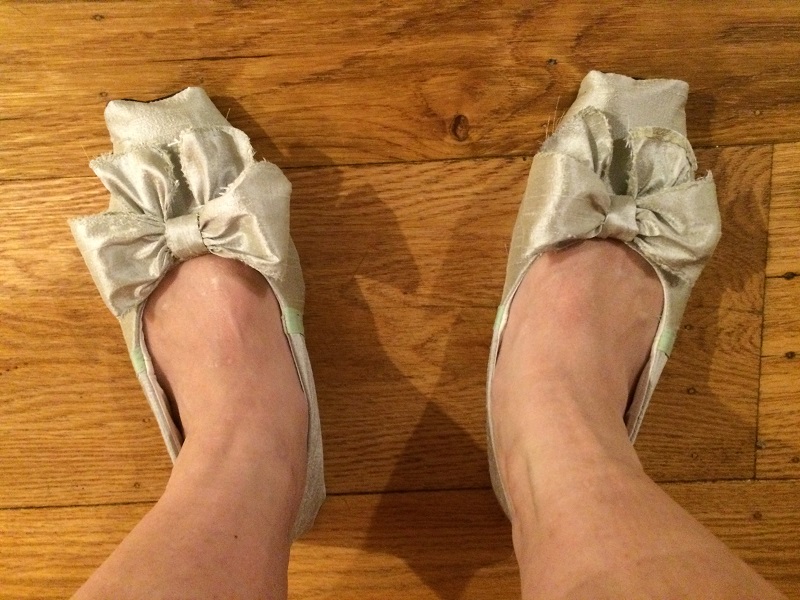 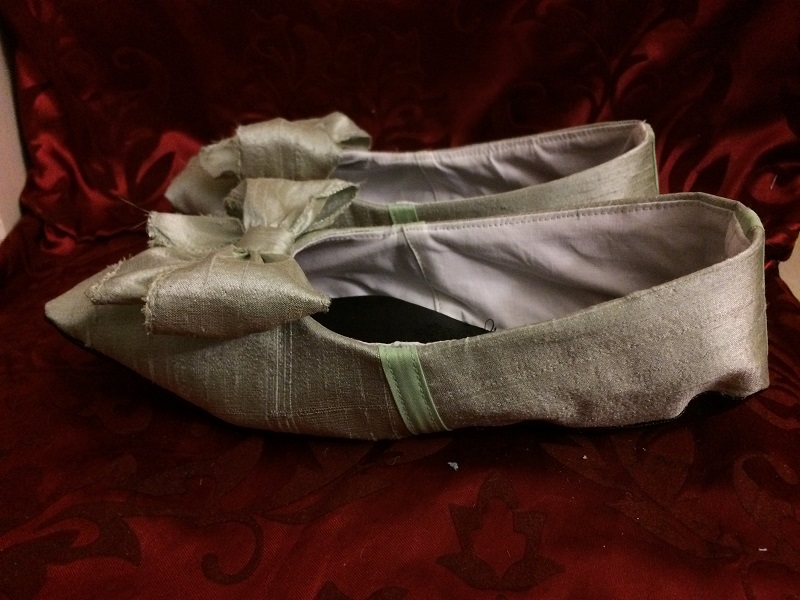 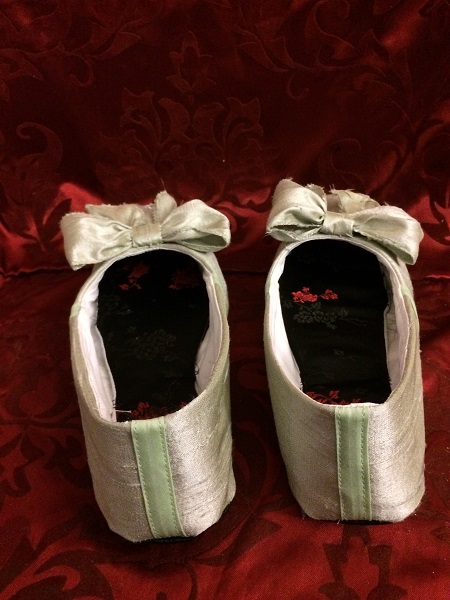 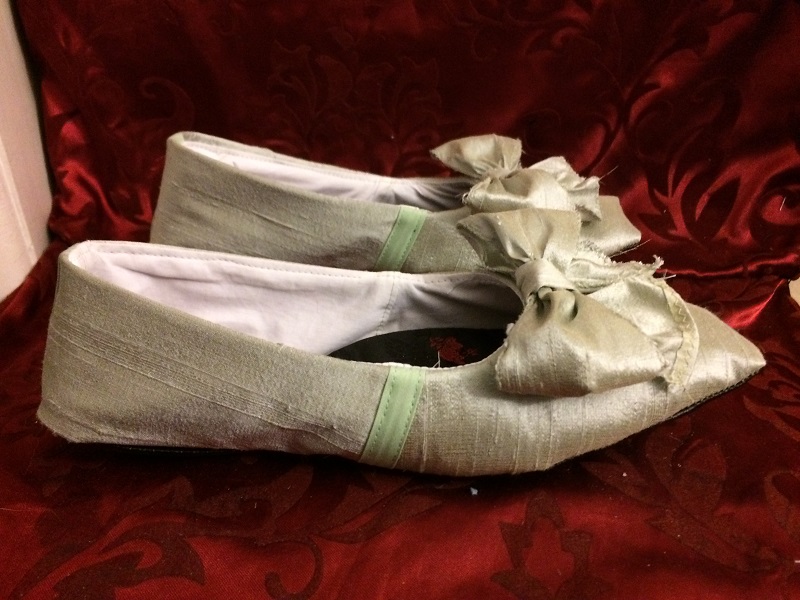 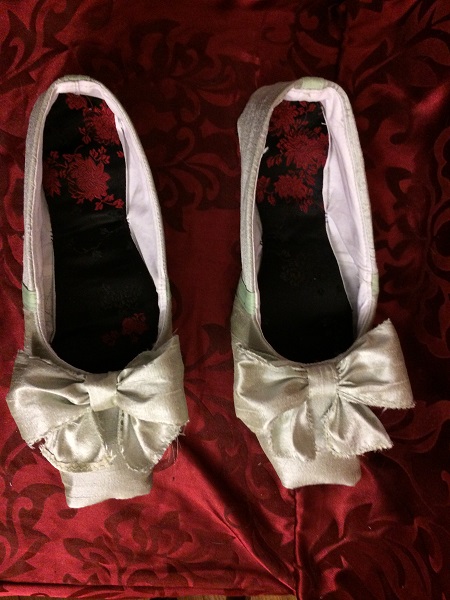 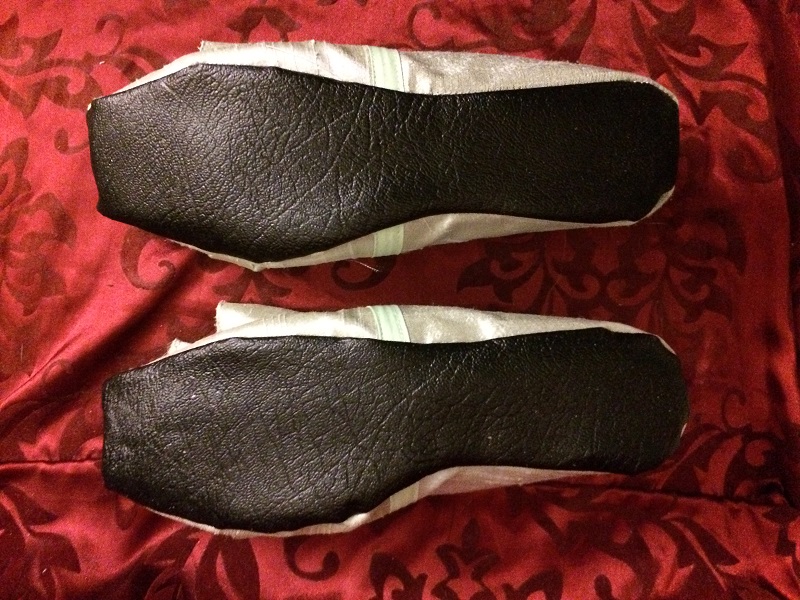 Added an "L" to the left shoe since they are very similar. 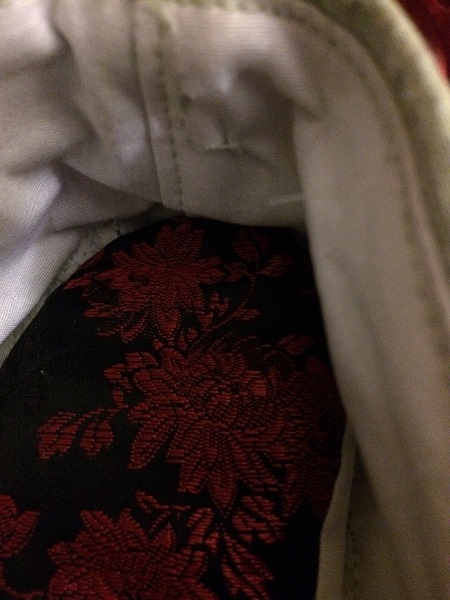 Here's is how the insoles were cut, covered and added to the shoe. 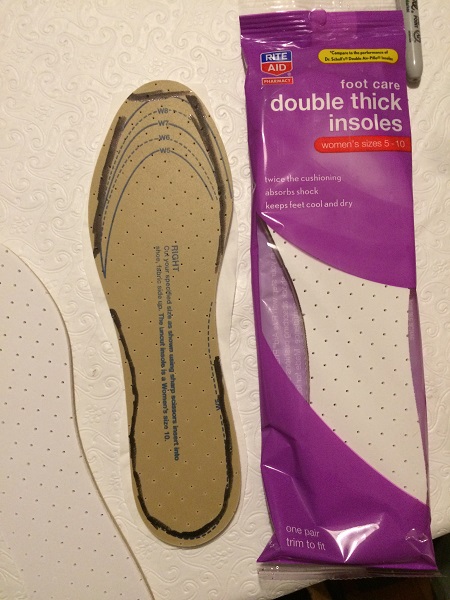 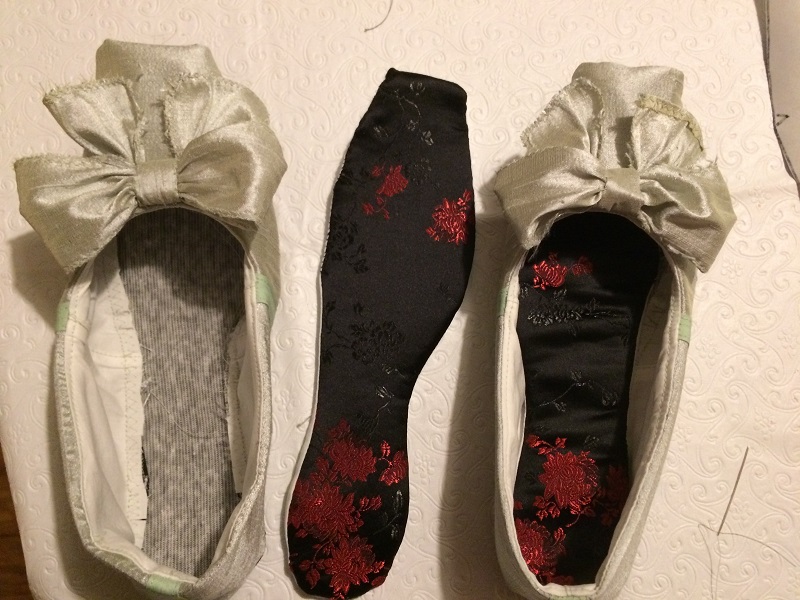 The top on the first shoe ended up too big so I sewed a seam across the toe and had some of the fashion fabric under the shoe, but then the length of the shoe was too small. The second shoe ended up being a right shoe so I ended up with two right shoes. That one, finally, the pattern modifications were better fitting.

Here's what the resulting sole pattern looks like compared to a Scholl's size 6 insole pattern: 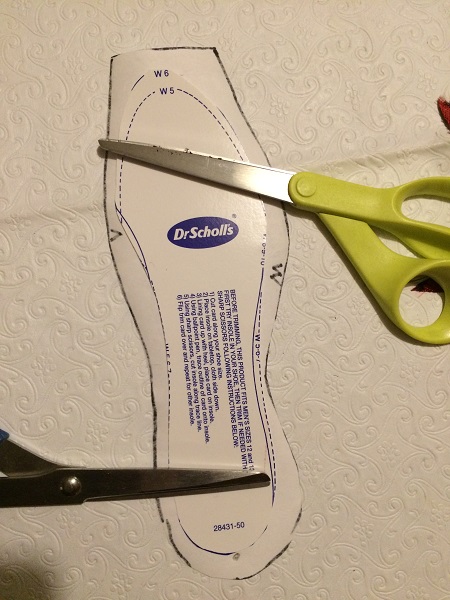 The faux leather from stash that was used under the dupioni silk and on the soles: 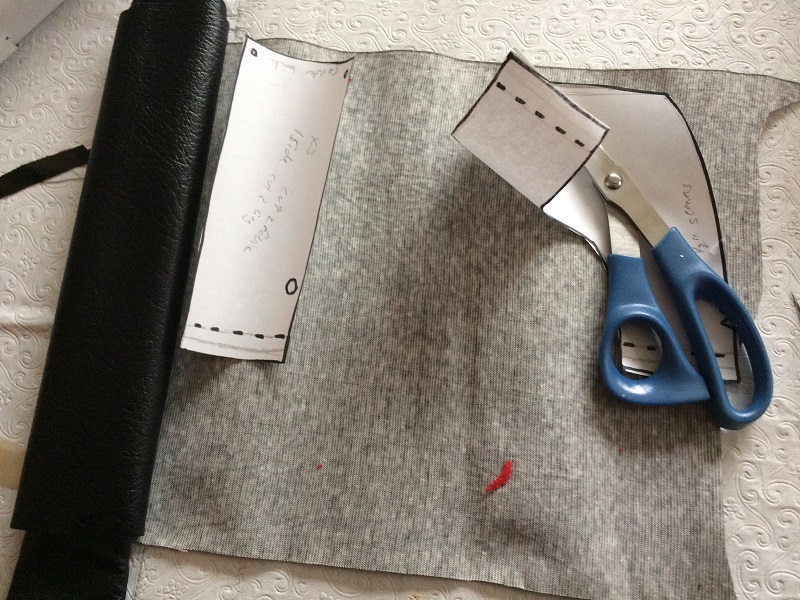 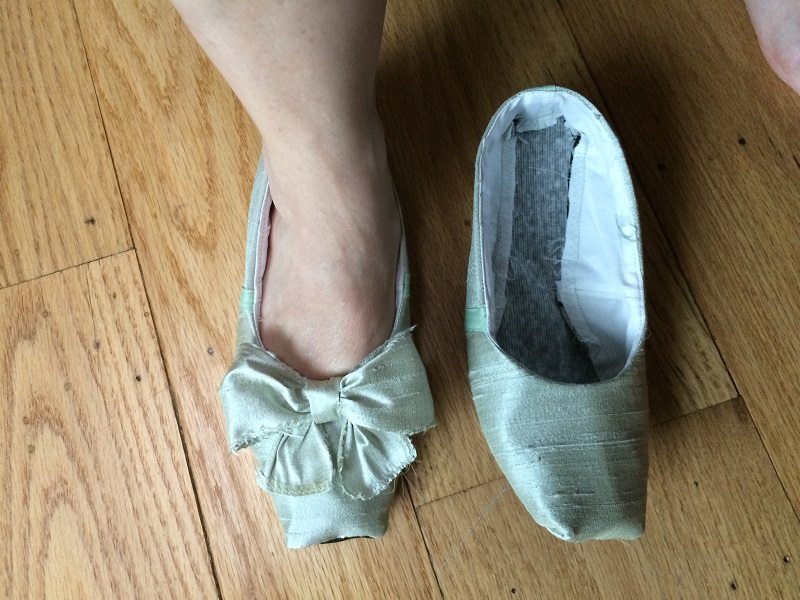 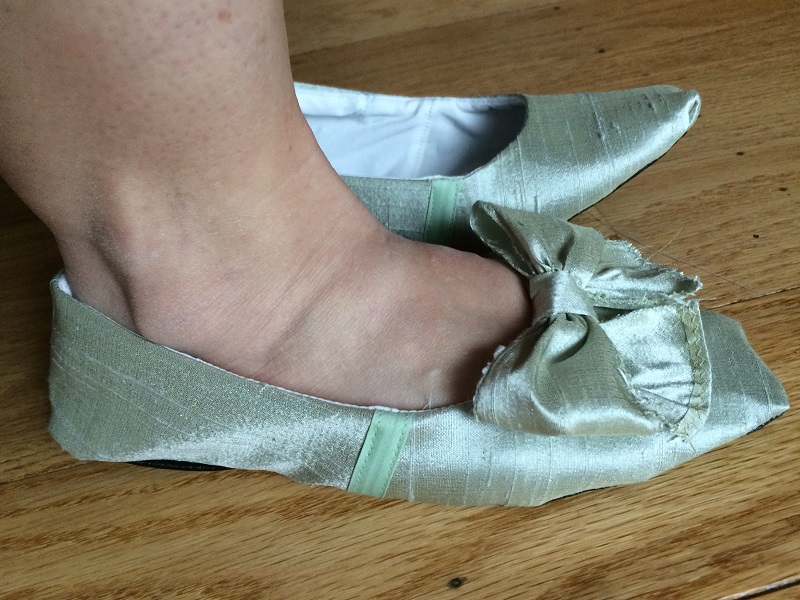 Next mockups used Butterick B5523 and the tutorial. The shoes ended up too big with a gaping problem. On the first shoe, I tried adding lacing loops and ribbon. The placement of the loops and ribbon wasn't quite right, using bias on the inside top didn't work well, and the shoe shape was still not right. The second shoe ended up two inches too big. 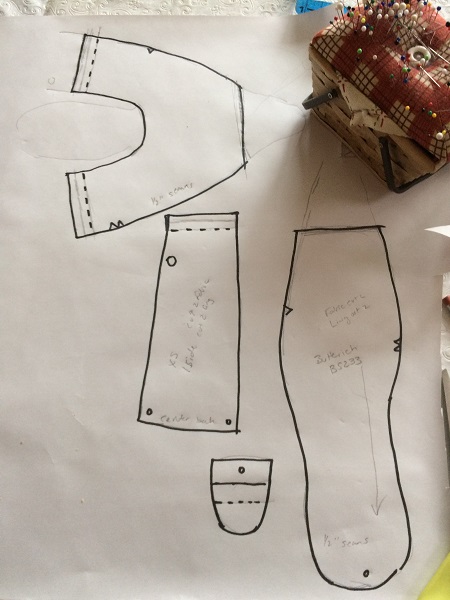 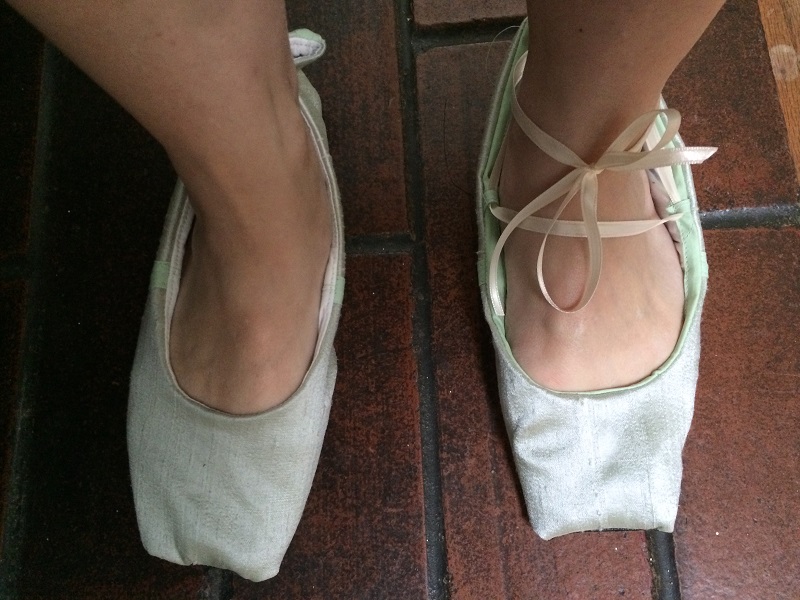 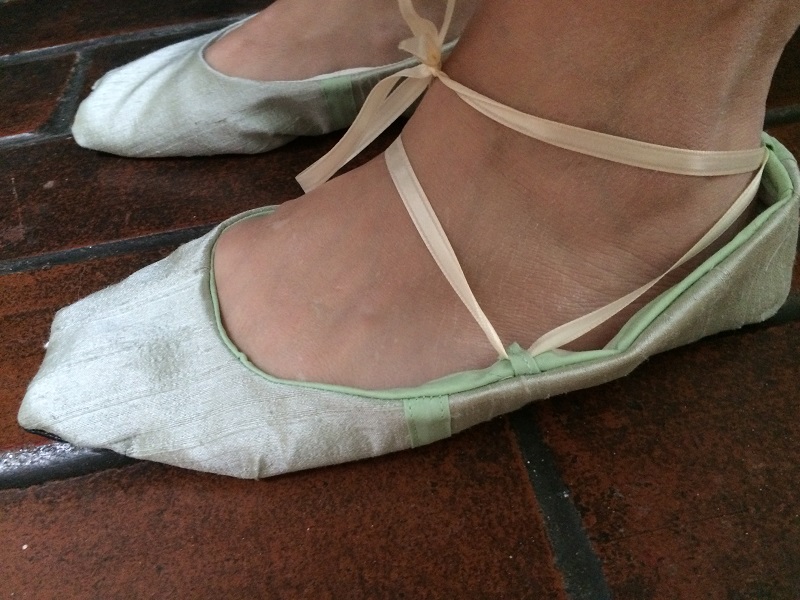 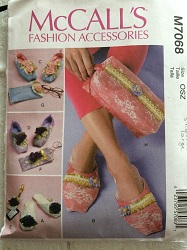 Because McCall's M7068 had the square toe like extant shoes, I tried this first. I tried altering the heel to eliminate the elastic back. On the second shoe, I tried changing the toe box. These used interfacing for the uppers and batting for the insole. A heavy cotton/poly was used for the soles. 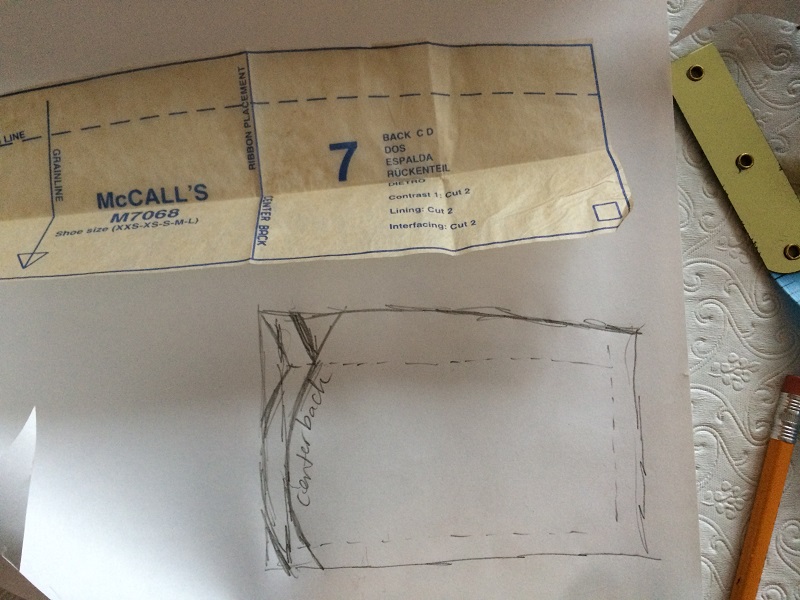 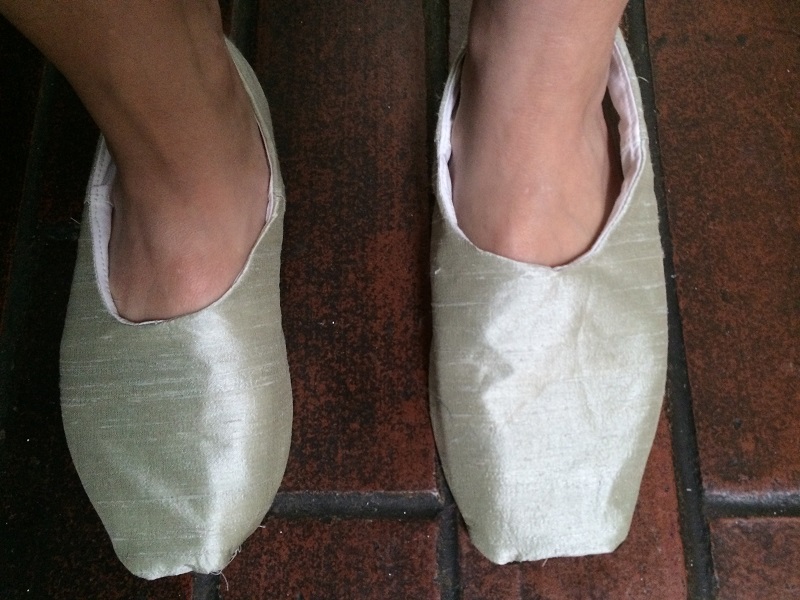 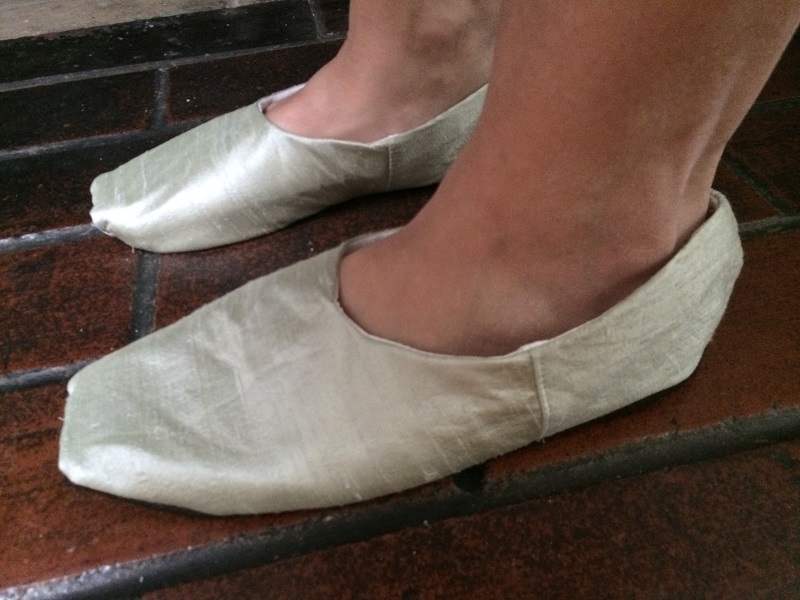