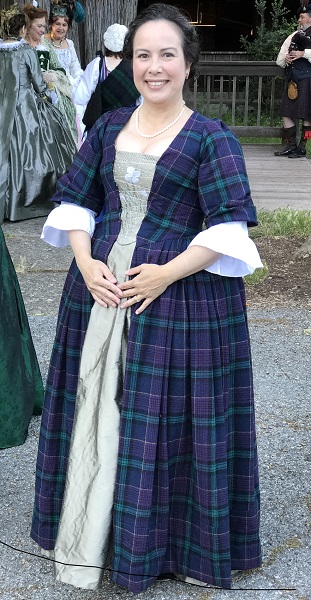 This wool plaid 1740s dress over silk petticoat and stomacher was made for a Greater Bay Area Costumers Guild (GBACG) dinner based on the Outlander television show and books. A group of us made plaid dresses to go with the theme. 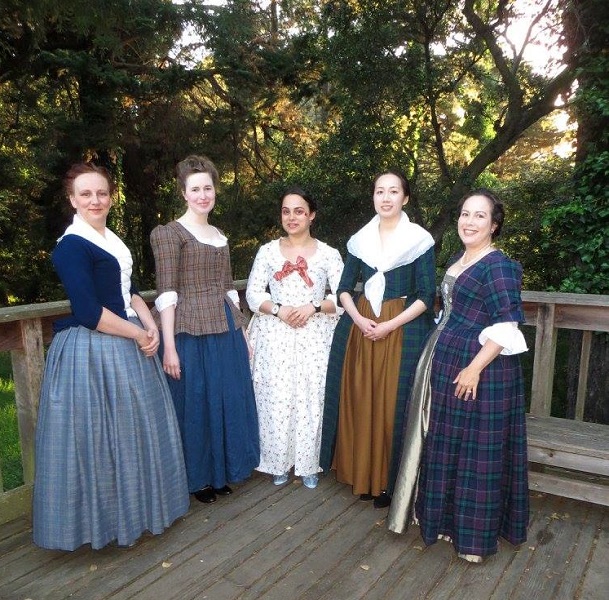 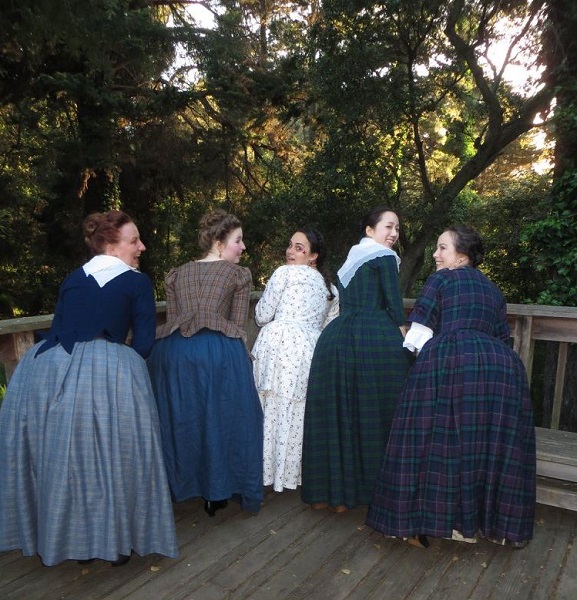 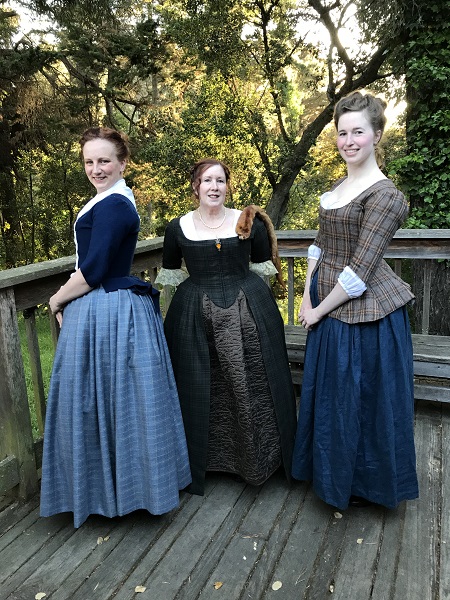 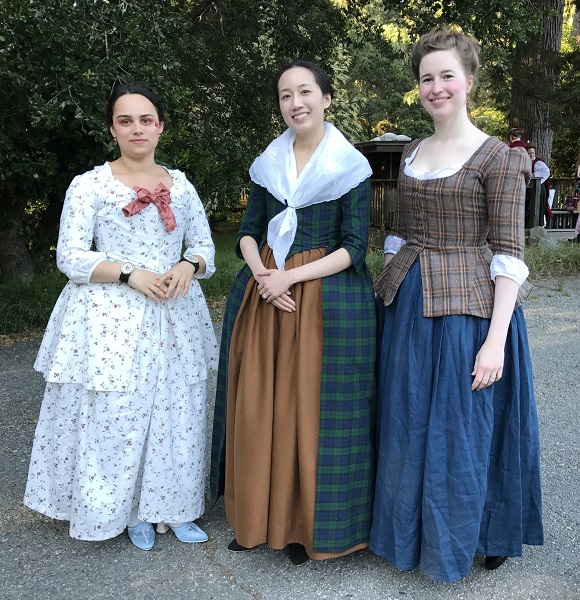 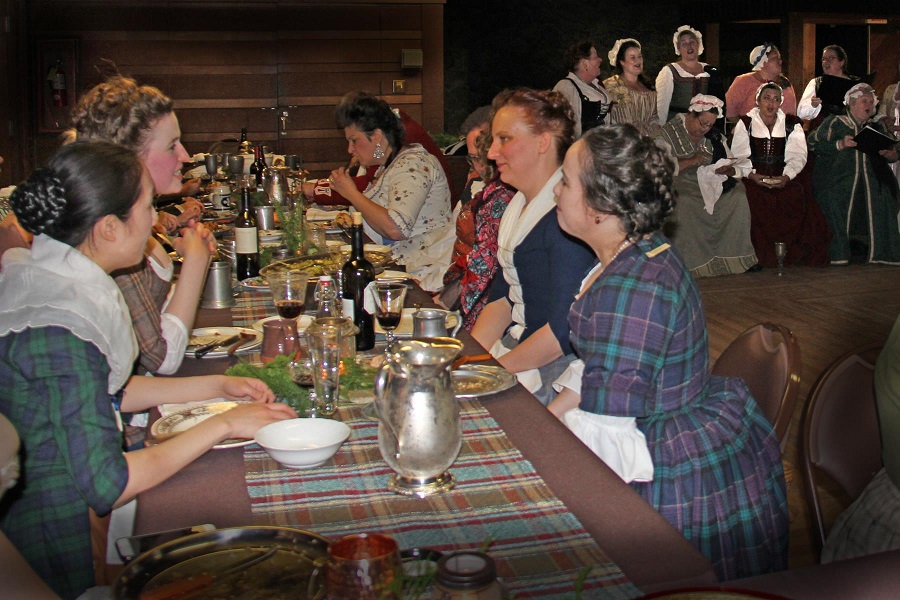 [20180204] Last year, I had imagined that I was going to sew a sacque dress in time for the PEERS Outlander Ball. That didn't happen, so I pulled the box with my Outlander feast dress back out and found the note I left to myself. 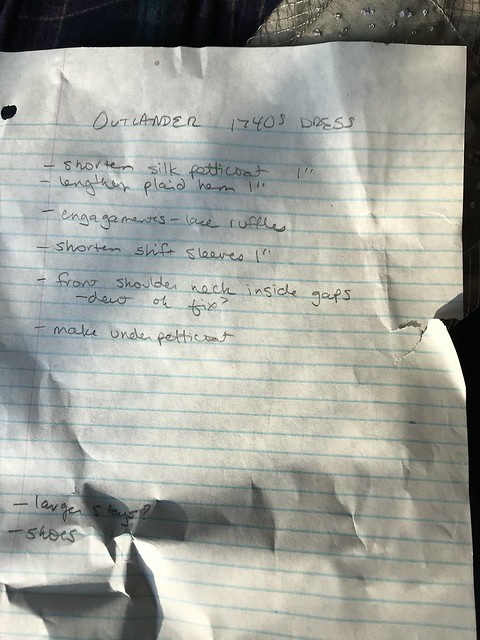 Then I closed the lid and didn't start on the list until the day of the ball. I managed to:

Most of the altering worked well. I loved having engagementes. From the photos, however, they look a bit too full all around (too gathered) and at the top (should be narrower). I'll leave them on this dress for now and will try to remember to do something different with future engagementes. 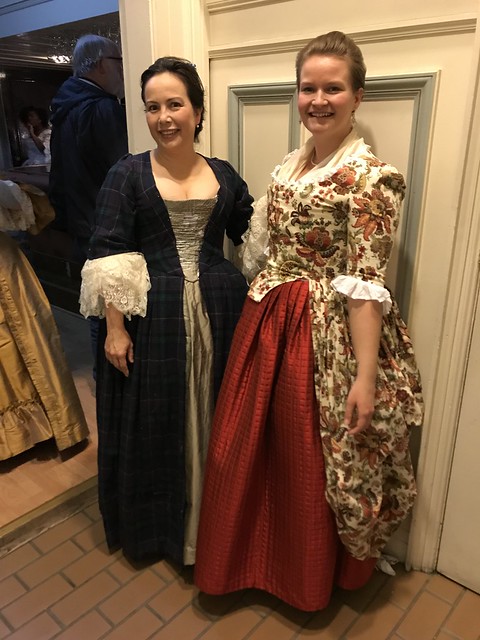 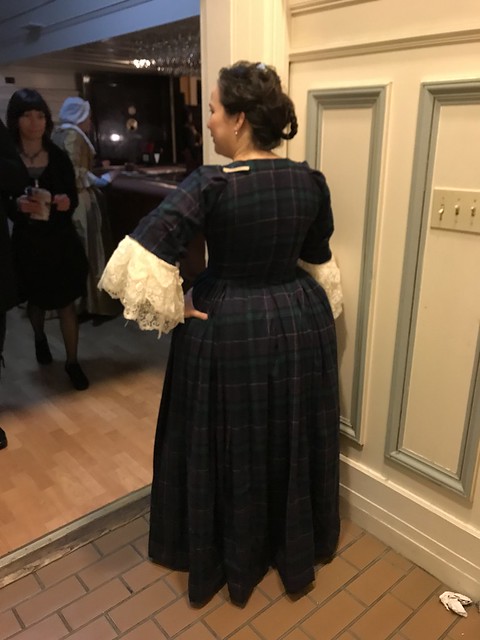 Group photos from Lauren Moyer's camera. Not sure if this was a GBACG group. I was glad to be in it. I love how it looks like we are a big happy group. In reality, I don't know everyone's names and only chatted with a fraction of these people. It does fulfill some weird human need to belong to a group even if only for a few minutes in real time (and forever in photos). 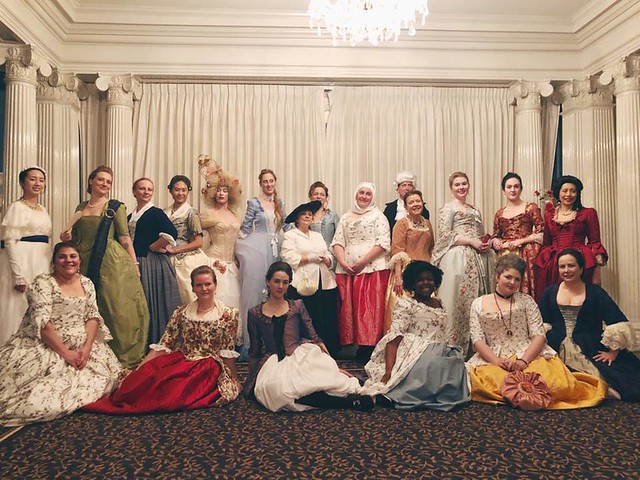 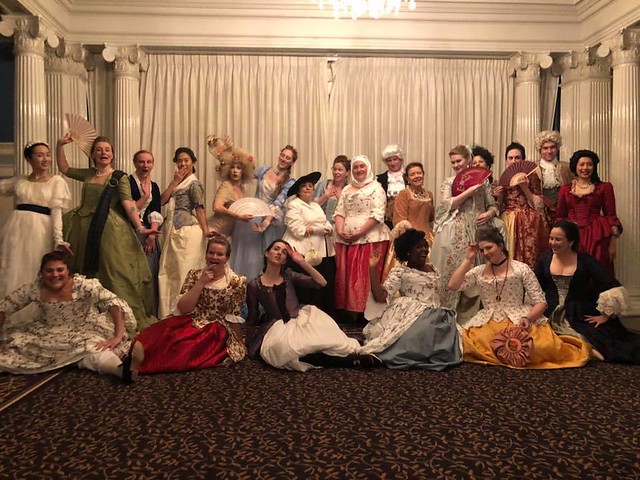 I should fix things before putting it away. In reality, my new note will be: *Does anyone have a good source for 18th century dress/stomacher pinning? Looking for something more historical and sturdy, rather than the small metal headed pins that come with men's business shirts which end up bending.

[2017] On my first wearing, there were some things that I might want to change later. First, the chemise sleeves are too long and there are no lace engagementes. My strapless stays were worn too low which made a bust curve instead of a straight front. The front edge gaped a little. I pinned it down, but the front neckline may need a dart or the shoulder shortened. The wool is hemmed too short and the gray petticoat hemmed too long and/or the back butt rump could use a bit more padding. Not sure if the wrinkles in the back are because the bodice is too long or because the stays were in the wrong place.

Inspiration was Claire's gathering dress from the television series.

Previous incarnation was as a pleated wool skirt that I wore to Austria. 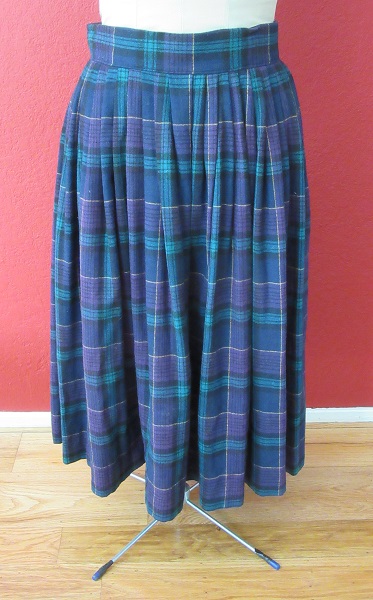 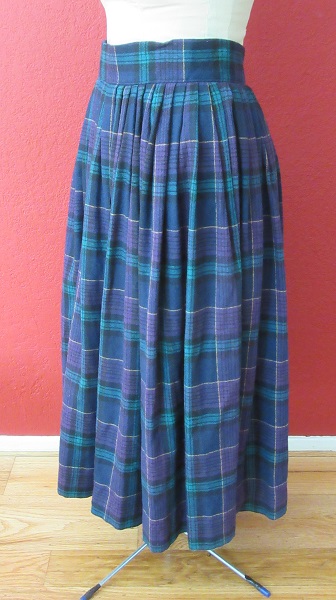 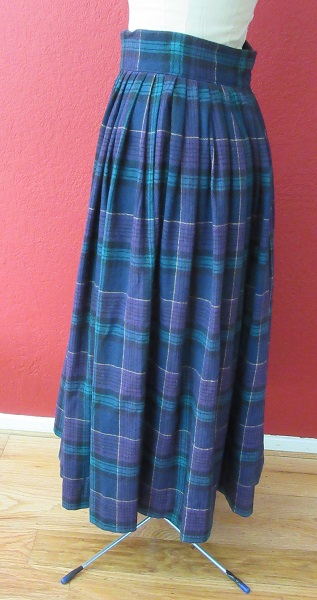 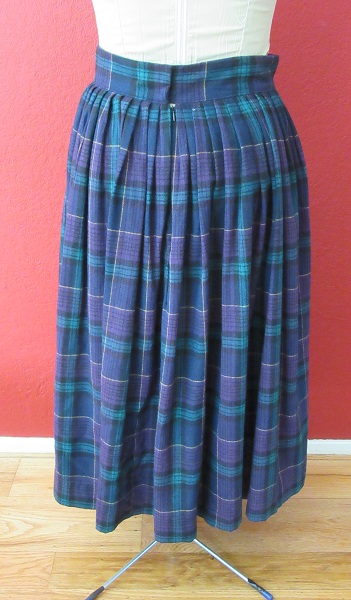 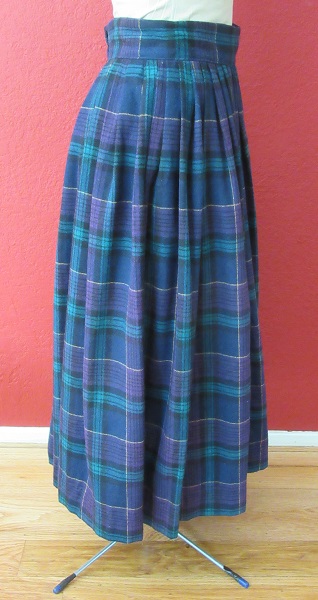 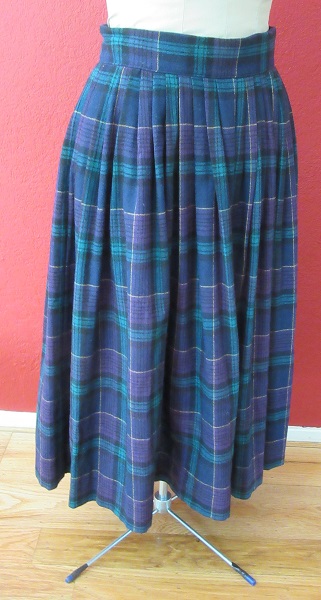 Navy blue and purle plaid wool dress was originally a skirt worn to Austria in 2012. Remnant was not enough to make the dress so I had to take the skirt apart to use the fabric in this dress.
Wool with striped linen lining has inside machine butthole lacing strips. Wool back is pleated down. Side and front skirts are gathered onto the bodice lining. Many piecings of fabric.

Pattern was a mashup of

This was the wrong petticoat, but I used it in a pinch since I hadn't made one for this shape.These are shown over paniers instead of the rump.

Gray silver silk stomacher with boned interfacing and polyester embroidery. Used silver embroidery thread to try to emulate the silver netting on historical stomachers. Instead of a Scottish thistle which someone else had already patterned out, I tried to make mine a California poppy in lavendar/blue instead of orange. French knots of the silver was used to fill in blank spaces and a chain stitch was used on the inside of the faux net.
Pattern for stomacher shape from American Duchess Simplicity 8161 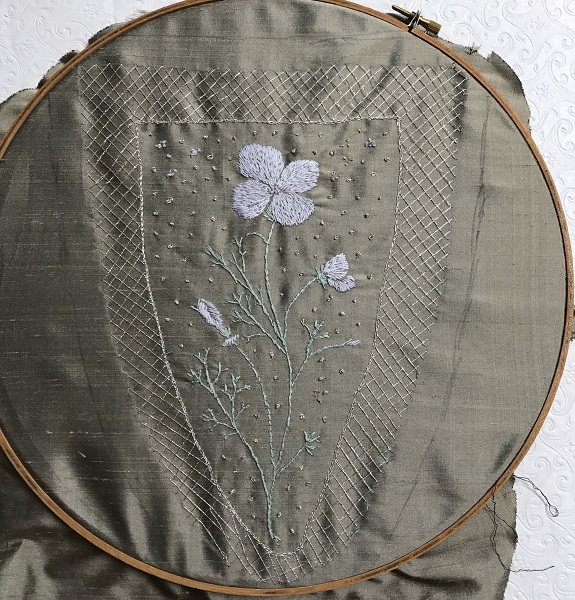 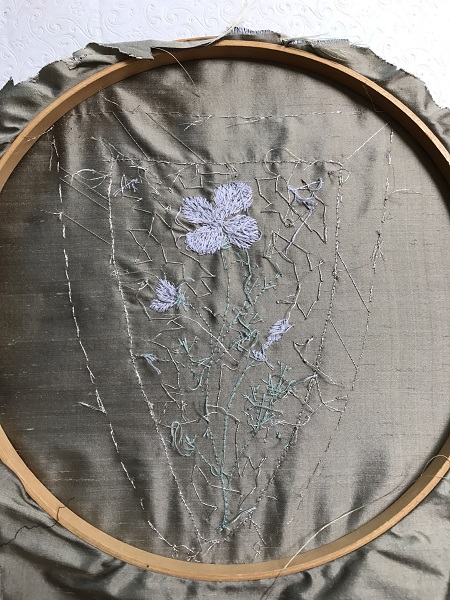 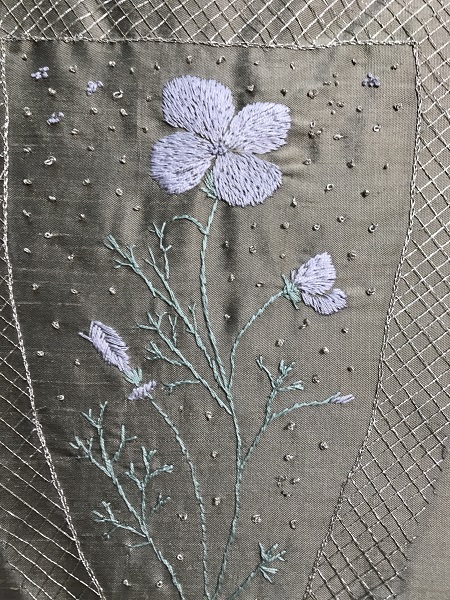 Hair ponytail/queue was made to create a 1740s hairstyle. Pulled out the hair so ends were not even, tied string to section less than half. Folded over and then braided so queue would be fatter at the base and smaller at the end to more simulate real hair. Bobby pinned big end near the nape of neck and folded up into circle on back top of head.
Kendra Van Cleave, "18th Century Hair & Wig Styling: History & Step-by-Step Techniques", 2014, page 148-152, Summer.